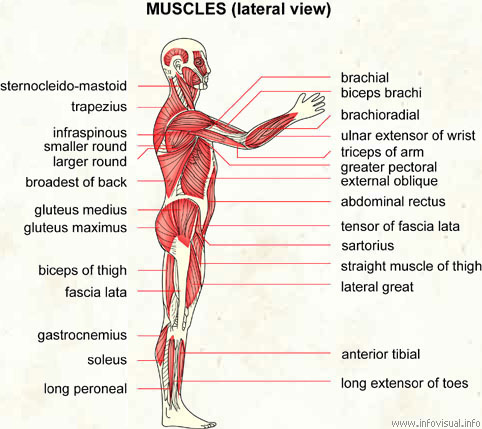 Voici le code HTML déjà fait, pour voir cette image sur votre site web : Voici le code UBB déjà fait, pour voir cette image sur votre Forum :
Muscles (lateral view): fibrous organs that produce motion by contracting.
Brachial: muscle of the outer arm.
Biceps brachi: an arm muscle with two points of attachment.
Brachioradial: muscle used to rotate the hand.
Ulnar extensor of wrist: muscle connected to the elbow.
Triceps of arm: an arm muscle with three points of attachment.
Greater pectoral: bulky chest muscle.
External oblique: muscle whose fibres are oblique in relation to the body when it is standing.
Abdominal rectus: abdominal muscle with vertical fibres.
Tensor of fascia lata: muscular membrane that stretches and tightens.
Sartorius: muscle that pivots the lower leg on the thigh and the thigh on the pelvis.
Straight muscle of thigh: vertical muscle above the knee.
Lateral great: large muscle of the outer thigh.
Anterior tibial: muscle of the leg below the knee.
Long extensor of toes: muscles that extends the toes.
Long peroneal: muscle below the peroneals and above the metatarsals.
Soleus: extensor muscle of the foot.
Gastrocnemius: the two muscles of the calf.
Fascia lata: membrane enveloping and supporting a muscle or group of muscles.
Biceps of thigh: leg muscles with two points of attachment.
Gluteus maximus: large buttock muscle.
Gluteus medius: buttock muscle.
Broadest of back: large back muscle.
Larger round: large muscle involved in the movements of the shoulder.
Smaller round: small shoulder muscle.
Infraspinous: muscle below the dorsal spine.
Trapezius: back muscle between the scapula and the spinal column.
Sternocleido mastoid: neck muscle connecting the sternum to the clavicle and relative to the mastoid process.