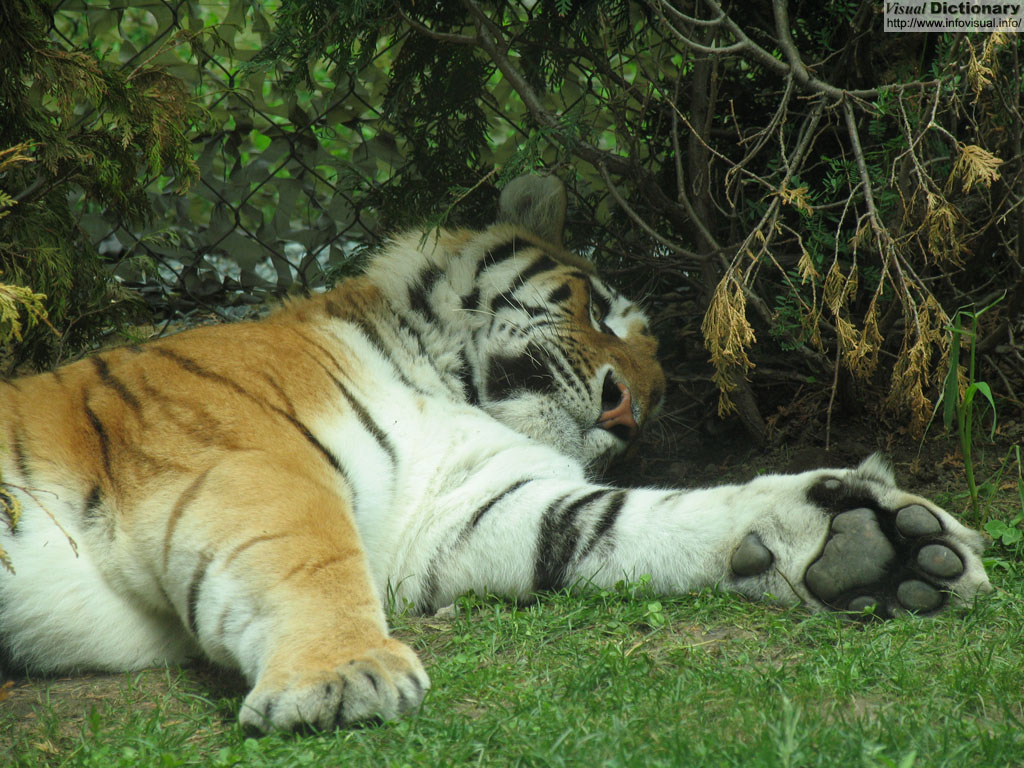 The tiger (Panthera tigris) is a member of the Felidae family; the largest and the most powerful of the four "big cats" in the genus Panthera. Native to much of eastern and southern Asia, the tiger is an apex predator and an obligate carnivore. Reaching up to 4 metres in total length and weighing up to 300 kilograms, the larger tiger subspecies are comparable in size to the biggest extinct felids. Aside from their great bulk and power, their most recognizable feature is the pattern of dark vertical stripes that overlays near-white to reddish-orange fur, with lighter underparts. Highly adaptable, tigers range from the Siberian taiga, to open grasslands, to tropical mangrove swamps. They are territorial and generally solitary animals, often requiring large contiguous areas of habitat that support their prey demands. This, coupled with the fact that they are endemic to some of the more densely populated places on earth, has caused significant conflicts with humans. Of the nine subspecies of modern tiger, three are extinct and the remaining six are classified as endangered, some critically so. The primary direct causes are habitat destruction and fragmentation, and hunting. Their historical range, which once reached from Mesopotamia and the Caucasus through most of South and East Asia, has been radically reduced. While all surviving species are under formal protection, poaching, habitat destruction and inbreeding depression continue to be threats.

Tigers are the heaviest cats found in the wild, but the subspecies differ markedly in size, tending to increase proportionally with latitude, as predicted by Bergmann's Rule. Large male Siberian Tigers (Panthera tigris altaica) can reach a total length of 3.5 m and a weight of 306 kilograms. Apart from those exceptional large individuals, male Siberian tigers usually have a head and body length of 190–220 cm and an average weight of 227 kg (the tail of a tiger is 60–110 cm long). The heaviest wild Siberian tiger on record weighed in at 384 kg, but according to Mazak these giants are not confirmed via reliable references. Females are smaller, the size difference between male and female tigers tends to be more pronounced in the larger subspecies of tiger, with males weighing up to 1.7 times as much as the females. Consequently, females of the Siberian and Bengal subspecies weigh only between 100 and 181 kg. Island-dwelling tigers, such as the Sumatran subspecies, are much smaller than mainland tigers, with males usually weighing only 100–140 kg and females 75–110 kg. The extinct Bali Tiger was even smaller, with a weight of 90–100 kg in males and 65–80 kg in females.