Internal anatomy of a bony fish

Voici le code HTML déjà fait, pour voir cette image sur votre site web : Voici le code UBB déjà fait, pour voir cette image sur votre Forum :
Internal anatomy of a bony fish: finned aquatic vertebrates animal with skin covered with scales. It lives in water and is usually oviparous.
Brain: seat of the mental faculties of a fish.
Esophagus: part of the digestive tract connecting the mouth to the stomach.
Dorsal aorta: vessel in the back that carries blood from the heart to the organs.
Stomach: part of the digestive tract between the esophagus and the intestine.
Air bladder: pocket in which urine collects.
Spinal cord: part of the nervous system that connects the brain to all other parts of a fish.
Kidney: blood-purifying organ.
Urinary orifice: opening for eliminating urine.
Genital Orifice: opening related to the genital organs.
Anus: end of the digestive tract.
Gonad: hormone-secreting sexual gland of a fish.
Intestine: last part of the digestive tract.
Pyloric cecum: cul-de-sac related to the intestine.
Gall bladder: small sac containing the bile.
Liver: bile-producing digestive gland.
Heart: blood-pumping organ.
Gills: respiratory organ of a fish.
Tooth: hard organ of a fish used to shred food.
Eye: sight organ of a fish.
Olfactory bulb: bulging part of the smell organ of smell of a fish. 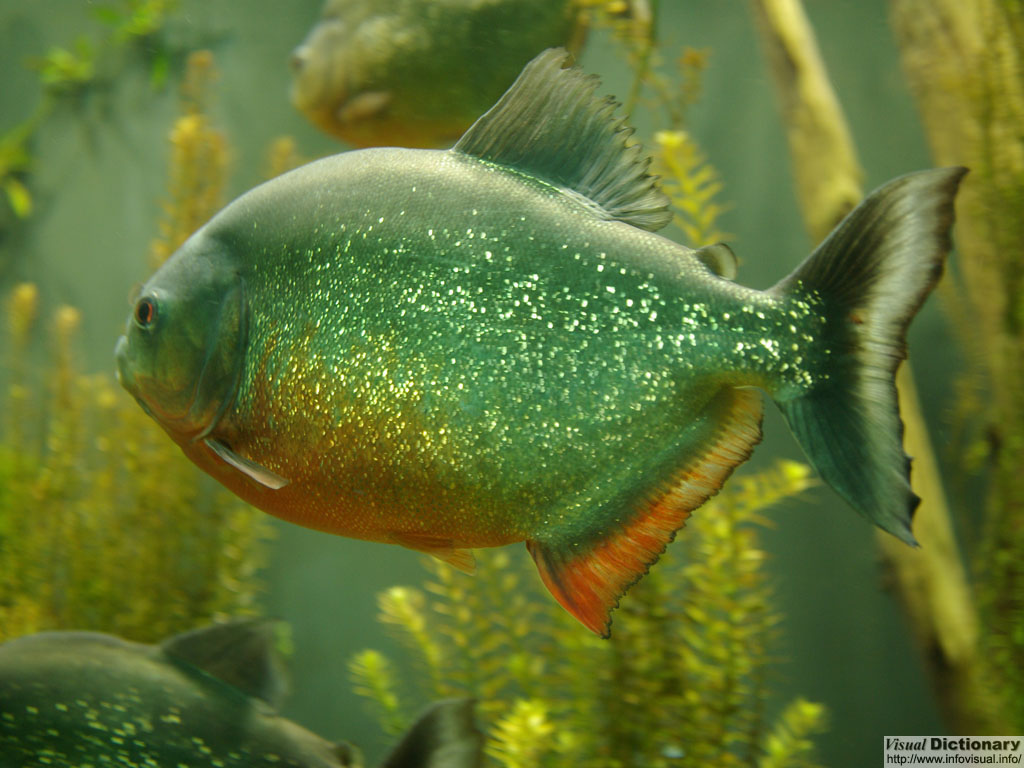 A Piranha or piraña is a member of a family of omnivorous freshwater fish which live in South American rivers. In Venezuelan rivers they are called caribes. They are known for their sharp teeth and an aggressive appetite for meat. Piranhas are not generally violent and have been known to be domesticated in home and office fish tanks. Piranhas belong to the family of Serrasalmidae. Traditionally, only the four genera Pristobrycon, Pygocentrus, Pygopristis, and Serrasalmus are considered to be true piranhas, due to their specialized teeth. However, a recent analysis showed that, if the piranha group is to be monophyletic, it should be restricted to Serrasalmus, Pygocentrus, and part of Pristobrycon, or expanded to include these taxa plus Pygopristis, Catoprion, and Pristobrycon striolatus. Pygopristis was found to be more closely related to Catoprion than the other three piranha genera.

Piranhas are found only in the Amazon basin, in the Orinoco, in rivers of the Guyanas, in the Paraguay-Paraná, and in the São Francisco River systems; some species of piranha have extremely broad geographic ranges, occurring in more than one of the major basins mentioned above, whereas others appear to have much more limited distributions. However, piranha have been introduced into parts of the United States, even being occasionally found in the Potomac River, but they typically do not survive the cold winters of that region. Recently a piranha was caught by a fisherman in the Catawba River in North Carolina. This is the first known case in North Carolina and possibly in the region. Piranha have also been discovered in the Kaptai Lake in South-East Bangladesh. Research is being carried out to establish how piranha have moved to such distant corners of the world from their original habitat. It is anticipated that rogue exotic fish traders have released them in the lake to avoid being caught by anti-poaching forces.