Internal anatomy of a crayfish 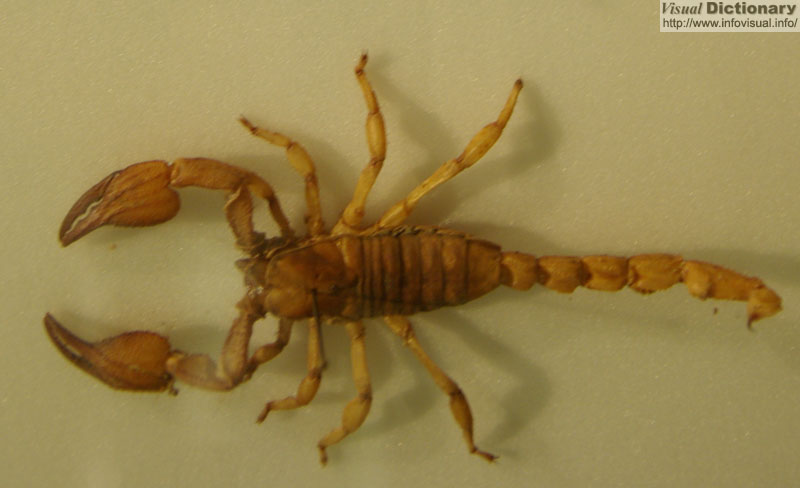 A Scorpions are eight-legged carnivorous arthropods. They are members of the order Scorpiones within the class Arachnida. There are about 2,000 species of scorpions, found widely distributed south of about 49° N, except New Zealand and Antarctica. The northernmost part of the world where scorpions live in the wild is Sheerness on the Isle of Sheppey in the UK, where a small colony of Euscorpius flavicaudis has been resident since the 1860s. The body of a scorpion is divided into two parts: the cephalothorax (also called the prosoma) and the abdomen (opisthosoma). The abdomen consists of the mesosoma and the metasoma. Scorpions have quite variable lifespans and the actual lifespan of most species is not known.

The age range appears to be approximately 4-25 years (25 years being the maximum reported life span in the species Hadrurus arizonensis). Lifespan of Hadogenes species in the wild is estimated at 25-30 years. Scorpions prefer to live in areas where the temperatures range from 20°C to 37°C (68°F to 99°F), but may survive from freezing temperatures to the desert heat. Scorpions of the genus Scorpiops living in high Asian mountains, bothriurid scorpions from Patagonia and small Euscorpius scorpions from middle Europe can all survive winter temperatures of about -25°C. They are nocturnal and fossorial, finding shelter during the day in the relative cool of underground holes or undersides of rocks and coming out at night to hunt and feed. Scorpions exhibit photophobic behavior, primarily to evade detection by their predators such as birds, centipedes, lizards, mice, possums, and rats.

Scorpions are opportunistic predators of small arthropods and insects. They use their chelae (pincers) to catch the prey initially. Depending on the toxicity of their venom and size of their claws, they will then either crush the prey or inject it with neurotoxic venom. This will kill or paralyze the prey so the scorpion can eat it. Scorpions have a relatively unique style of eating using chelicerae, small claw-like structures that protrude from the mouth that are unique to the Chelicerata among arthropods. The chelicerae, which are very sharp, are used to pull small amounts of food off the prey item for digestion. Scorpions can only digest food in a liquid form; any solid matter is disposed of by the scorpion.

All scorpion species possess venom. In general, scorpion venom is described as neurotoxic in nature. One exception to this generalization is Hemiscorpius lepturus which possesses cytotoxic venom. The neurotoxins consist of a variety of small proteins that affect neuronal ion channels responsible for action potentials, which serve to interfere with neurotransmission in the victim. Scorpions use their venom to kill or paralyze their prey so that it can be eaten; in general it is fast-acting, allowing for effective prey capture. The effects of the sting can be severe.

Scorpion venoms are optimized for action upon other arthropods and therefore most scorpions are relatively harmless to humans; stings produce only local effects (such as pain, numbness or swelling). A few scorpion species, however, mostly in the family Buthidae, can be dangerous to humans. Among the most dangerous are Leiurus quinquestriatus, otherwise ominously known as the deathstalker, which has the most potent venom in the family, and members of the genera Parabuthus, Tityus, Centruroides, and especially Androctonus, which also have powerful venom. The scorpion which is responsible for the most human deaths is Androctonus australis, or the yellow fat-tailed scorpion, of North Africa. The toxicity of A. australis's venom is roughly half that of L. quinquestriatus, but despite a common misconception A. australis does not inject noticeably more venom into its prey. The higher death count is simply due to its being found more commonly, especially near humans. Human deaths normally occur in the young, elderly, or infirm; scorpions are generally unable to deliver enough venom to kill healthy adults. Some people, however, may be allergic to the venom of some species. Depending on the severity of the allergy, the scorpion's sting may cause anaphylaxis and death. A primary symptom of a scorpion sting is numbing at the injection site, sometimes lasting for several days. Scorpions are generally harmless and timid, and only voluntarily use their sting for killing prey, defending themselves or in territorial disputes with other scorpions. Generally, they will run from danger or remain still.