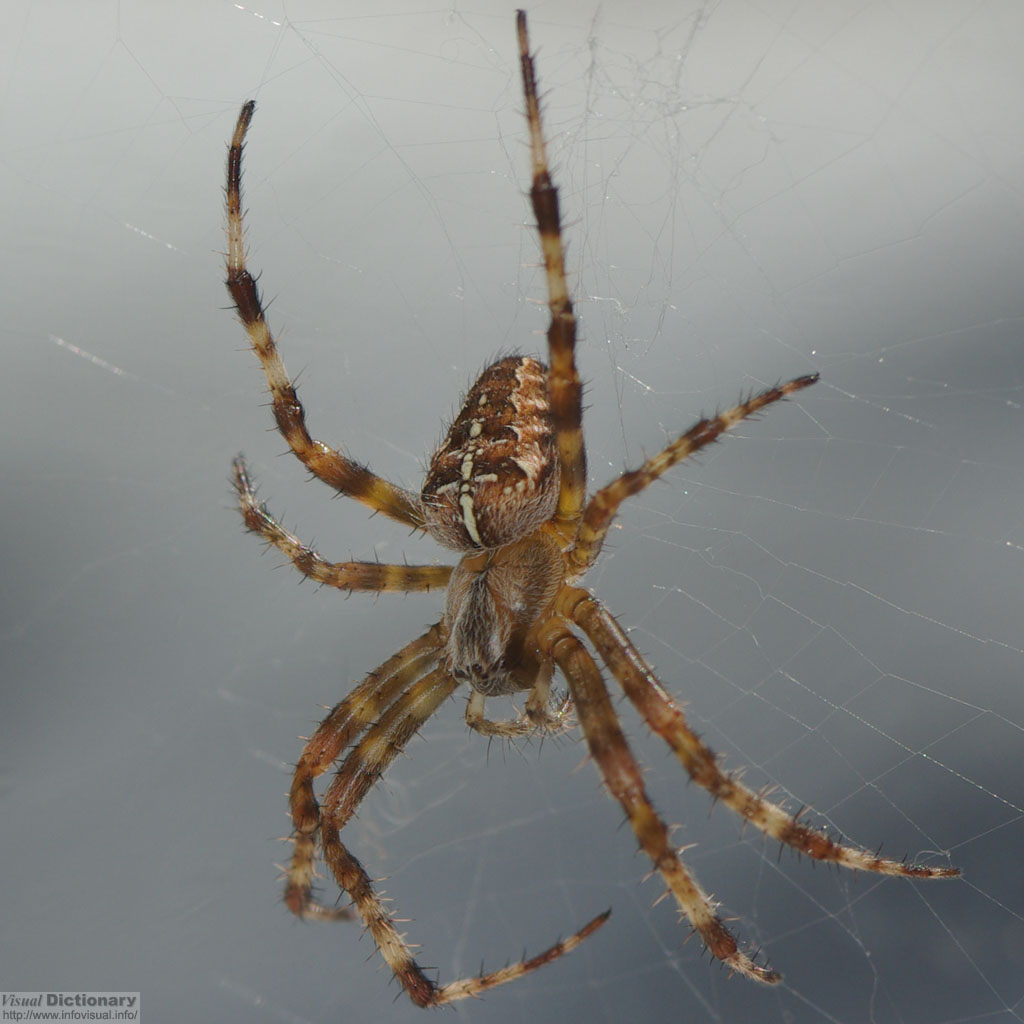 Spiders are predatory invertebrate animals that have two body segments, eight legs, no chewing mouth parts and no wings. They are classified in the order Araneae, one of several orders within the larger class of arachnids, a group that also contains scorpions, whip scorpions, mites, ticks, and opiliones. The study of spiders is called arachnology. All spiders produce silk, a thin, strong protein strand extruded by the spider from spinnerets most commonly found on the end of the abdomen. Many species use it to trap insects in webs, although there are also many species that hunt freely. Silk can be used to aid in climbing, form smooth walls for burrows, build egg sacs, wrap prey, and temporarily hold sperm, among other applications.

All spiders except those in the families Uloboridae and Holarchaeidae, and in the suborder Mesothelae (together about 350 species) can inject venom to protect themselves or to kill prey. Only about 200 species, however, have bites that can pose health problems to humans. Many larger species' bites may be quite painful, but will not produce lasting health concerns. Spiders are found all over the world, from the tropics to the Arctic, living underwater in silken domes they supply with air, and on the tops of mountains. In 1973, Skylab 3 took two spiders into space to test their web-spinning capabilities in zero gravity.

Spiders are chelicerates and therefore arthropods. As arthropods they have: segmented bodies with jointed limbs, all covered in a cuticle made of chitin and proteins; heads that are composed of several segments that fuse during the development of the embryo. Being chelicerates, their bodies consist of two tagmata, sets of segments that serve similar functions: the foremost one, called the cephalothorax or prosoma, is a complete fusion of the segments that in an insect would form two separate tagmata, the head and thorax; the rear tagma is called the abdomen or opisthosoma. The pattern of segment fusion that forms chelicerates' heads is unique among arthropods, and what would normally be the first head segment disappears at an early stage of development, so that chelicerates lack the antennae typical of most arthropods. In fact chelicerates' only appendages ahead of the mouth are a pair of chelicerae, and they lack anything that would function directly as "jaws". The first appendages behind the mouth are called pedipalps, and serve different functions within different groups of chelicerates.

Spiders and scorpions are members of one chelicerate group, the arachnids. While scorpions' chelicerae are generally a modest pair of claws that they use in feeding, spiders' terminate in fangs that are are generally venomous, and fold away behind the upper sections while not in use, while the upper sections generally have thick "beards" that filter solid lumps out of their food, as spiders can take only liquid food; On the other hand scorpions' pedipalps generally form large claws for capturing prey, while those of spiders are fairly small sensors whose bases also act as an extension of the mouth; in addition those of male spiders have enlarged last sections used for sperm transfer.

In spiders the cephalothorax and abdomen are joined by a small, cylindrical pedicel, which enables the abdomen to move independently when producing silk. The upper surface of the cephalothorax is covered by a single, convex carapace while the underside is covered by two rather flat plates. The abdomen is soft and egg-shaped. It shows no sign of segmentation, except that the primitive Mesothelae, whose living members are the Liphistiidae, have segmented plates on the upper surface.

Spiders, unlike insects, have only two body segments (tagmata) instead of three: a fused head and thorax (called a cephalothorax or prosoma) and an abdomen (called the opisthosoma). The exception to this rule are the assassin spiders, whose cephalothorax seems to be almost divided into two independent units. The abdomen and cephalothorax are connected with a thin waist called the pedicle or the pregenital somite, a trait that allows the spider to move the abdomen in all directions. The pedicle (waist) is actually the last segment (somite) of the cephalothorax and is lost in most other members of the Arachnida (in scorpions it is only detectable in the embryos).

Spiders occur in a large range of sizes. The smallest, dwarf spiders of the subfamily Erigoninae, are less than 1 mm (about .05 inches) in body length. The largest and heaviest spiders occur among tarantulas, which can have body lengths up to 90 mm (about 3.5 inches) and leg spans up to 250 mm (about 10 inches). Only three classes of pigment (ommochromes, bilins and guanine) have been identified in spiders, although other pigments have been detected but not yet characterized. Melanins, carotenoids and pterins, very common in other animals, are apparently absent. In some species the exocuticle of the legs and prosoma is modified by a tanning process, resulting in brown coloration. Bilins are found for example in Micrommata virescens, resulting in its green color. Guanine is responsible for the white markings of the European garden spider Araneus diadematus. It is in many species accumulated in specialized cells called guanocytes. In genera such as Tetragnatha, Leucauge, Argyrodes or Theridiosoma, guanine creates their silvery appearance. While guanine is originally an end-product of protein metabolism, its excretion can be blocked in spiders, leading to an increase in its storage. Structural colors occur in some species, which are the result of the diffraction, scattering or interference of light, for example by modified setae or scales. The white prosoma of Argiope results from hairs reflecting the light, Lycosa and Josa both have areas of modified cuticle that act as light reflectors.

The best-known method of prey capture is by means of sticky webs. Varying placement of webs allows different species of spider to trap different insects in the same area, for example flat horizontal webs trap insects that fly up from vegetation underneath while flat vertical webs trap insects in horizontal flight. Web-building spiders have poor vision, but are extremely sensitive to vibrations. A few spiders use the surfaces of lakes and ponds as "webs", detecting trapped insects by the vibrations that these cause while struggling.

Net-casting spiders weave only small webs but then manipulate them to trap prey. Those of the genus Hyptiotes and the family Theridiosomatidae stretch their webs and then release them when prey strike them, but do not actively move their webs. Those of the family Deinopidae weave even smaller webs, hold them outstretched between their first two pairs of legs, and lunge and push the webs as much as twice their own body length to trap prey, and this move may increase the webs' area by a factor of up to ten. Experiments have shown that Deinopis spinosus has two different techniques for trapping prey: strikes over its back to catch flying insects, whose vibrations it detects; and forward strikes to catch ground-walking prey that it sees. These two techniques have also been observed in other deinopids. Walking insects form most of the prey of most deinopids, but one population of Deinopis subrufus appears to live mainly on tipulid flies that they catch with the backwards strike.

Mature female bolas spiders of the genus Mastophora build "webs" that consist of only a single "trapeze line", which they patrol. They also construct a bolas made of a single thread, tipped with a large ball of very wet sticky silk. They emit chemicals that resemble the pheromones of moths, and then swing the bolas at the moths. Although they miss on about 50% of strikes, they catch about the same weight of insects per night as web-weaving spiders of similar size. The spiders eat the bolas if they have not made a kill in about 30 minutes, rest for a while, and then make new bolas. Wolf spiders, jumping spiders, fishing spiders and some crab spiders capture prey by chasing it, and rely mainly on vision to locate prey. Others, including many crab spiders, are ambush predators. A few species that prey on bees, which see ultraviolet, can adjust their ultraviolet reflectance to match the flowers in which they are lurking.

Portia uses both webs and cunning, versatile tactics to overcome prey. Some jumping spiders of the genus Portia hunt in ways that seem intelligent. When stalking web-building spiders, some of which would be dangerous opponents, they lure them out by vibrating the webs to mimic the struggle of a trapped insect or the courtship signals of a male spider, or approach along an overhanging twig or rock and abseil down a silk thread to kill the prey. Laboratory studies show that Portia learns very quickly how to overcome web-building spiders that neither it nor its evolutionary ancestors would have met in the wild. While some of these behaviors are clearly instinctive, experiments have shown that Portia’s instinctive tactics are only starting points for a trial-and-error approach from which these spiders learn very quickly. However they seem to be relatively slow "thinkers", which is not surprising as their brains are vastly smaller than those of mammalian predators. Once within biting range, Portias use different combat tactics against different prey spiders. On the other hand they simply stalk and rush unarmed prey such as flies, and also capture prey by means of sticky webs.

Ant-mimicking spiders face several challenges: they generally develop slimmer abdomens and false "waists" in the cephalothorax to mimic the three distinct regions (tagmata) of an ant's body; they wave the first pair of legs in form to their heads to mimic antennae, which spiders lack, and to conceal the fact that they have but eight legs rather than six; they develop large color patches round one pair of eyes to disguise the fact that they generally have eight simple eyes, while ants have two compound eyes; they cover their bodies with reflective hairs to resemble the shiny bodies of ants. In some spider species males and females mimic different ant species, as female spiders are usually much larger than males. Ant-mimicking spiders also modify their behavior to resemble that of the target species of ant, for example many adopt a zig-zag pattern of movement, ant-mimicking jumping spiders avoid jumping, and spiders of the genus Synemosyna walk on the outer edges of leaves in the same way as Pseudomyrmex. Ant-mimicry in many spiders and other arthropods may be for protection from predators that hunt by sight, including birds, lizards and spiders. However several ant-mimicking spiders prey either on ants or on the ants "livestock" such as aphids. When at rest the ant-mimicking crab spider Amyciaea does not closely resemble Oecophylla, but while hunting it imitates the behavior of a dying ant to attract worker ants. After a kill some spiders hold their victims between themselves and large groups of ants to avoid being attacked.

While spiders are generalist predators, in actuality their different methods of prey capture often determine the type of prey taken. Thus web-building spiders rarely capture caterpillars, and crab spiders that ambush prey in flowers capture more bees, butterflies and some flies than other insects. Groups of families that tend to take certain types of prey because of their prey capture methods are often called guilds. A few spiders are more specialized in their prey capture. Dysdera captures and eats sowbugs, pillbugs and beetles, while pirate spiders eat only other spiders. Bolas spiders in the family Araneidae use sex pheromone analogs to capture only the males of certain moth species. Despite their generally broad prey ranges, spiders are one of the most important links in the regulation of the populations of insects.