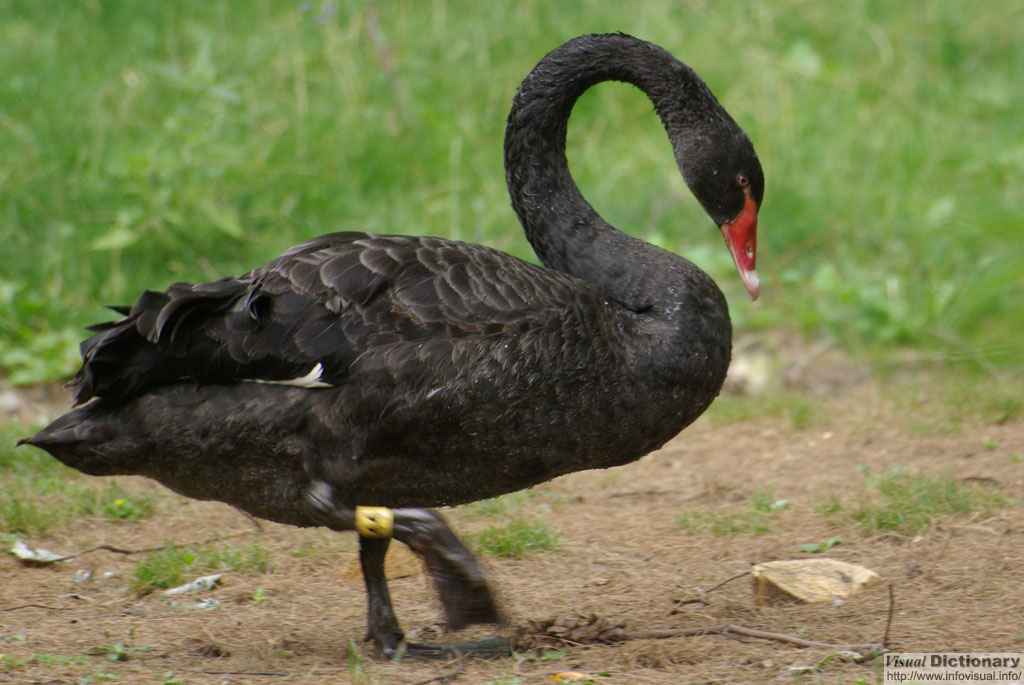 The Black Swan was formerly placed into a monotypic genus, Chenopis. Black Swan is a large waterbird which breeds mainly in Australia. Black Swans are mostly black feathered birds, with a line of white flight feathers of the wing edges that sometimes show when at rest, and are conspicuous in flight. The bill is bright red, with a pale bar and tip; and legs and feet are greyish-black. Cobs (males) are slightly larger than pens (females), with a longer and straighter bill. Cygnets (immature birds) are a greyish-brown with pale-edged feathers. A mature Black Swan measures between 1.1 and 1.4 metres in length and weighs 6-9 kg. Its wing span, in flight, is between 1.6 and 2 metres. The neck is long (relatively the longest neck among the swans) and curved in an "S". The Black Swan utters a musical and far reaching bugle-like sound, called either on the water or in flight, as well as a range of softer crooning notes. It can also whistle, especially when disturbed while breeding and nesting. The Black Swan is unlike any other Australian bird, although in poor light and at long range it may be confused with a magpie-goose in flight. However the Black Swan can be distinguished by its much longer neck and slower wing beat.

When swimming, Black Swans hold their necks arched or erect, and often carry their feathers or wings raised in an aggressive display. In flight, a wedge of Black Swans will form as a line or a V, with the individual birds flying strongly with undulating long necks, making whistling sounds with their wings and baying, bugling or trumpeting calls. Generally, Black Swans nest in the wetter winter months (February to September), occasionally in large colonies. A typical clutch contains 4 to 8 greenish-white eggs that are incubated for about 35-40 days. After hatching the cygnets are tended by the parents for about 6 months until fledging, and may ride on their parent's back for longer trips into deeper water. A Black Swan nest is essentially a large heap or mound of reeds, grasses and weeds between 1 and 1.5 metres in diameter and up to 1 metre high, in shallow water or on islands. A nest is reused every year, restored or rebuilt as needed. Both parents share the care of the nest. Like other swans, the Black Swan is largely monogamous, pairing for life (about 6% divorce rate). Recent studies have shown that around a third of all broods exhibit extra-pair paternity.