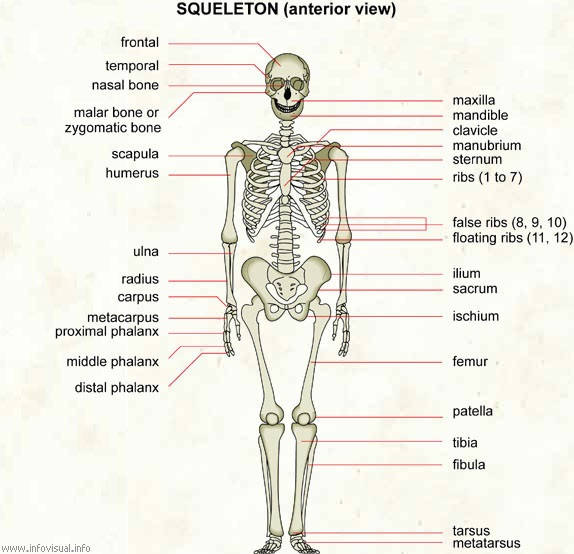 Voici le code HTML déjà fait, pour voir cette image sur votre site web : Voici le code UBB déjà fait, pour voir cette image sur votre Forum :
Skeleton (anterior view): set of bones making up the framework of human body.
Maxilla: bony upper part of the jaw.
Mandible: bony lower part of the jaw.
Clavicle: bone of the shoulder girdle, between the sternum and the scapula.
Manubrium: upper part of the sternum.
Sternum: bone connected to the front of the ribs of the thoracic cage.
Ribs (1 to 7): first bones of the thoracic cage.
False ribs (8, 9, 10): the eight, ninth and tenth ribs of the thoracic cage, which protect the lower part of the lungs.
Floating ribs (11, 12): last two ribs of the thoracic cage.
Ilium: bone of the pelvic girdle, comprised of the fusion of the ilium, the ischium and the pubic bone.
Sacrum: bone that is jointed with the hip bone to form the pelvis.
Ischium: one of the bones of the ilium.
Femur: the thigh bone, the longest bone of a human body.
patella: round, flat bone situated over the knee.
Tibia: bone forming the inside of the lower leg.
Fibula: bone forming the outside of the lower leg.
Tarsus: bony area at the back of the foot.
Metatarsus: bones of the foot between the tarsus and the toes.
Distal phalanx: last phalange of a finger.
Middle Phalanx: middle phalange of a finger.
Proximal phalanx: jointed segment of a finger or toe.
Metacarpus: hand bone between the carpus and the phalanges.
Carpus: jointed parts of the hand between the forearm and the metacarpus.
Radius: bone forming the outside of the forearm.
Ulna: bone forming the inside of the forearm.
Humerus: bone of the upper arm.
Scapula: bone of the back of the shoulder.
Malar bone or zygomatic bone: cheek bone.
Nasal bone: bones of the nose.
Temporal: bone of the temple.
Frontal: bone of the forehead.